The male and female threads have a tapered flank and controlled truncation at the crest and root to assure metal to metal crest-root contact just as the male-female thread flanks make contact. Upon further tightening, the thread crests flatten out and allow the flanks to make full contact. This full thread profile contact theoretically gives the tapered threads self-sealing ability. However, variations in condition of mating threads, fitting and port materials, assembly procedures and operating conditions make self-sealing highly unlikely without the aid of paste, tape, or preapplied thread sealants. 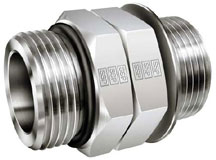 Tapered pipe fittings are prone to leakage because they are torque-sensitive. Over-tightening can distort the threads too much and create a leakage path. Also, tapered pipe threads are prone to loosening when exposed to high vibration and wide temperature variation. Repeated assembly and disassembly only aggravates the leakage problem by distorting the threads further. Tapered pipe threads are not to be used for mechanically joining components in a system where load would be placed perpendicular to the plumbing line. This weight will further weaken the sealing joint. In light of its sealing mechanism, assembly restrictions and design limitations, pipe thread connections are optimal only when the following conditions exist:

1. Minimum hydraulic shocks or vibration
2. The fitting is limited to one or two uses
3. The system utilizes low pressure; or few operating cycles (static condition) for higher-pressure service
4. Skilled workers trained in the pros and cons of pipe fitting assembly are present

For these reasons, tapered pipe threaded connections are not recommended for dynamic pressure systems.

Tapered Pipe Fittings are still widely used in industry, though, because of their relative low-cost, widespread familiarization among users, lack of alternative port designs offered by many component manufacturers, and/or when exposed to more caustic media which requires the corrosion resistance of metal-only seals.

Straight threaded adapters (also known as o-ring boss fittings and BSPP fittings) seat an O-ring on the shoulder of the male half of the connector against a metal sealing surface on the female port. Sealing is achieved and maintained by o-ring compression resulting from the clamping force generated by the tightening action. The straight threads do not seal; they provide the resistance (holding power) for service pressure.

Straight thread adapters fall into two general groups: adjustable and non-adjustable. Adjustable fittings, such as elbows and tees, allow the user to orient the shape in the direction desired before tightening to assemble. A non-adjustable fitting, such as a plug or connector, simply screws into a port and no adjustment is necessary.

Fittings that use o-rings for leak-tight connections continue to gain popularity in new hydraulic system design. The rubber-on-metal seating does not distort any metal parts and does provide a tangible “feel” when the connection is tight. This method of sealing also allows virtually unlimited disassemblies and reassemblies, though the o-ring should always be replaced as a precaution. When using o-rings, be certain that the compound used is compatible with system and environmental media.